Snowmageddon In The South 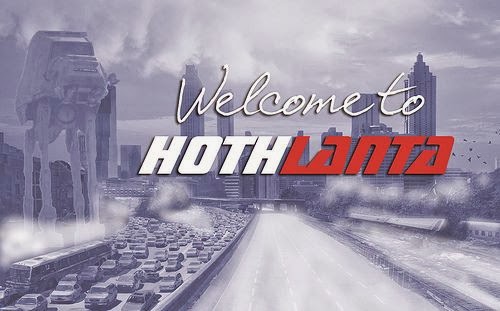 I realize that some of this may be lost on my international readers, especially those not knowledgeable on US geography and culture.  So for those folks let me give a couple of brief primers.  Many parts of the US are pretty culturally different and there can be jokes and tension between regions over these stereotypes.  The biggest rivalry is between the North and the South, and it's not just a hold-over from the Civil War.  Southerners are often perceived by others as rather dimwitted and backwards, though this is certainly not true in reality.  The stereotype is especially pushed when it comes to snow in the South.  You see, we don't get much cold weather down here (I'm a Southerner born and raised, so I can speak to this point).  And when we do people tend to freak out and panic.

One of the biggest jokes is that when snow is forecast everyone rushes to the store to get bread and milk.  I get frustrated and amused at this response for a few reasons.
Another huge problem is that because of the infrequent snowy weather our governments aren't really prepared.  There are only a few snowplows or salt trucks in each metro region, unlike our Northern neighbors.  In the North when there is bad weather all of the trucks and equipment jump into action and keep the roads clear and safe.  We have such limited weather in the South that the small number of trucks is usually sufficient.  But when we DO get real snow the system is overwhelmed.

And then you get people who just don't know what to do in this weather.  With limited to no experience, most Southern drivers go too slow or too fast on slick roads.  The worst ones are the rednecks (and I say this affectionately....I have friends and family who are rednecks) with their 4-wheel drive trucks.  Sorry, but when it's snow on top of ice you're going to spin out just as easily and have four wheels with no traction rather than two.  My father is from Sweden, taught driving when he lived there, and has always been involved with cars as a mechanic or sales manager.  When I was a teenager and we would get snow a couple of times a year he would take me out in it and teach me how to be safe.  He would have me slam on the breaks and step on the gas just to see what a spin-out felt like (always in a safe area) and how to get out of one.  Because of this training I am very comfortable in winter weather without being reckless.  Most of my fellow Southerners can't say the same thing, and truthfully they are pretty stupid in this regard.

Over the last couple of days we've been hearing about the chance of snow.  As of last night it was supposed to stay south of Atlanta, hitting middle and southern Georgia.  This morning the line had moved north and we now had a 30% chance of some snow in my area (northeast Georgia).  When I went into work my staff was talking about it and I started snickering and laughing.  Over the course of the morning I continued making jokes about "Snowmageddon" and everyone rushing to the store for bread and milk.  When clients started canceling appointments I rolled my eyes.  I was only working a half day so when I walked out to my car at around 12:30pm I was startled to see snow.  Real snow!  And accumulating!  I talked to my wife and she said that the chance had gone up to 100% (no duh at that point) and was expected to keep going for several hours.

So much for accurate weather predicting.

And remember those jokes I was telling?  How I was making fun of my fellow Southerners?  Yeah, not so funny when it took me almost 2 1/2 hours to drive 24 miles home.  Unsalted Roads + Stupid Drivers = GRRRRRRR!

Yep, you heard right.  INCHES.  Not feet!  (For those on the metric system that's about 2-7cm of accumulation).  And I can actually hear the laughter from my readers in the Northern US, Canada, mountainous areas, and Scandinavia.  Here's a photo of what it looks like from one of our local friend's front door. 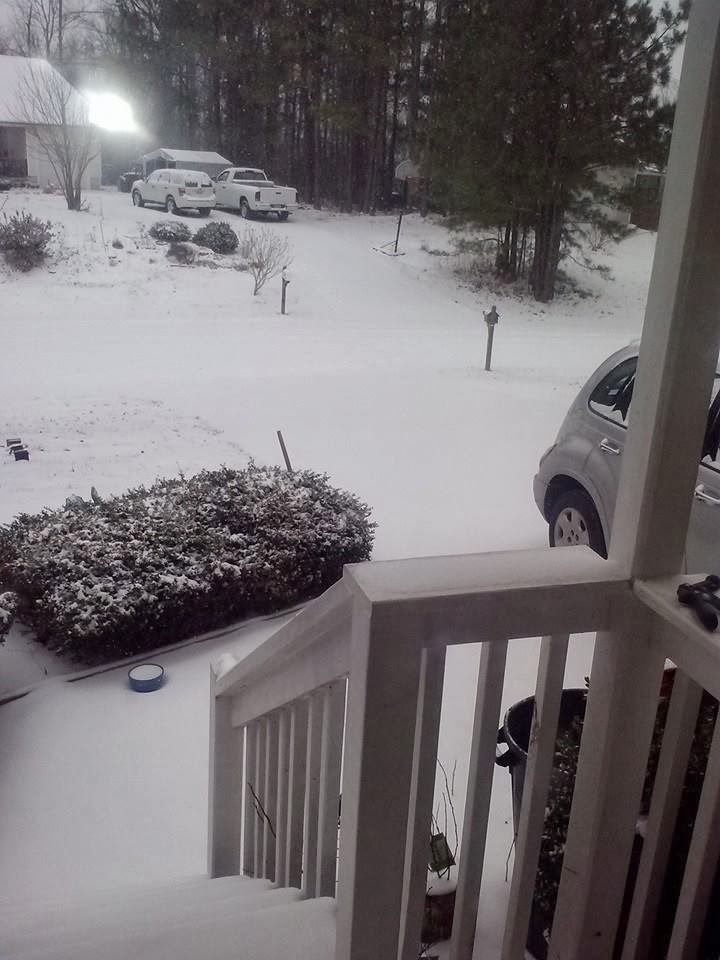 Because it's dropping into the teens tonight (Fahrenheit) any melted snow will freeze, making tomorrow even more dangerous in the morning.  We may not have much if any business tomorrow, yet I'll still try to make it in.  I'm not worried about myself, but the drivers around me are a concern.  Remember....untreated or poorly treated roads plus inexperienced drivers.

Welcome to winter in the South!
Posted by Chris Bern, DVM at 6:03 PM