A new adventure has begun in the life of the Bern family.  Today we brought home our new puppy.

After losing our dog, Guinevere, to lymphoma in the brain back in August, my wife had been wanting to get a new puppy that she could bond with and have as a snuggle-buddy.  Last month we found a Labrador retriever breeder that had a litter of puppies born September 15th.  My wife picked one out, we waited until she was old enough, and today we brought her home.

Little Yvaine (pronounced "ee-vane"; "Evie" for short) is named for the female lead in the movie Stardust.  Played by Claire Danes, Yvaine is a living star that falls from the sky and is discovered by a young man named Tristan who has left his home to recover the fallen star for the woman he thinks he loves.  Yvaine and Tristan go on an adventure as he brings her back, and the two end up falling in love.  It's a great fantasy and romantic comedy, one which I would recommend to anyone who likes happy endings.  And Robert De Niro has a very memorable role as a tough skyship captain who has a secret affinity for frilly dresses.

Our Yvaine slept the whole way home and has had the typical puppy pattern of moments of playfulness interspersed with deep sleep.  She is a really sweet girl but with a bit of a rotten streak.  She is pretty courageous, already having dared going up and down the stairs at our house, something other dogs have taken months to master.  Right now we're trying to get her to calm down enough to go to sleep, and it's a bit of a challenge.

The cats are avoiding her so far, and don't seem too eager.  Our oldest cat, Pooka, isn't as upset as we thought he would be, as this is the third dog that has been brought into his house during his lifetime. Maybe he's getting used to it.  Our other dog, Inara, was eager but unsure at first.  She is still very curious and is starting to play, though Yvaine startles her a bit at times.  Once Inara gets used to the newcomer, I can see them terrorizing the house with their play.

The kids are pretty obsessed with her, which is understandable right now.  As is typical for children their age, they're arguing over who gets to pet her or feed her.  But they are responsible kids, and it's always been important to me that they learn how to properly handle and care for pets, so I know they'll settle down into a normal pattern within a week or so.  By then my son will be back to his video games and my daughter will be tired of cleaning up puppy poop.

My wife is thrilled.  After all, this is her baby, and something she really wanted.  Yvaine is already bonding with her and I came home from shopping this afternoon to find the two of them curled up next to each other on the bed taking a nap.  She's going to spoil this little girl, but I must say that I love seeing the glow in her face when she kisses the little puppy's nose.

And the adventure begins again.  Housebreaking, obedience training, dealing with a whining puppy, handling her chewing on things she shouldn't, cleaning up messes....all of that over again.  But it's worth it to have the little bundle of fur cuddle next to you and see those deep brown eyes. 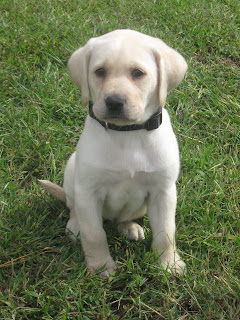