Dad To A New Driver

My son recently turned 15.  Where I live that means that he is now able to get a learner's permit and start driving.  I'm not sure that I'm completely prepared for this.

When I was growing up my father started teaching me how to use a manual transmission long before I was able to sit in the driver's seat.  He would have me shift from the passenger seat while he operated the clutch, which gave me a really good idea of how the car and engine felt and sounded when he needed to change gears.  By the time I started driving I knew how to operate a manual transmission better than an automatic one.

When I learned to drive it was taught as an elective in high school.  Apparently that isn't the case anymore and I am having to do all of the teaching myself.  Why me?  Because my wife absolutely refuses to be in the car with him driving until he is better.  I let him drive a few hundred yards in our subdivision one Sunday after church and she kept her eyes closed the entire time.  So with no official class and my wife bowing out, it's up to me.

We had him study the book provided by the DMV (or DDS here in Georgia....Department of Driver Services) and he passed the written test with no problems.  In our state that is all that is required to obtain his permit, though he is restricted on when and with whom he can drive.  In a year and a day from when his permit was issued he is eligible to get his full license, though I have to attest to him having accumulated at least 40 hours of driving by that time.

How am I handling all of this?  Fairly well.  Thankfully it takes a lot for me to freak out and even when I'm doing so I can usually remain outwardly calm.  With him as a new driver I can't afford to make him too nervous, even when inwardly I'm cringing and trying not to brace for impact.  I also now have a much better understanding why driver's education cars have brakes on the passenger side.  I've certainly wanted them a few times.

This is quite the milestone for me as a father, and one I've been dreading for years.  When I bought a new car in 2014 I almost got a Ford Mustang until my wife reminded me that we would soon have a teenage driver.  Instead I got a much more sensible Honda Civic (which I actually really like...though I still want the Mustang), knowing it would be safer and have lower insurance costs.  So I've thought about all of this for years and the moment is finally here.

My son is actually doing pretty well.  We've taken multiple drives in nearby residential areas and I've started having him drive around town when I'm running errands.  He's picking up on things pretty quickly and I'm not quite as worried whenever he is driving.  After several more weeks of this I think he'll be ready to tackle the interstate and the 70 mph speeds, though I know that will be frightening for both of us.

I now have a much greater appreciation for what my parents went through when I was learning to drive.  I remember my father taking me out in snow one time and telling me to hit the brakes so I would know what it felt like (the road was empty).  I didn't know that I was supposed to let up on the brakes and we ended up doing about a 270 degree spin, thankfully not hitting anything.  But I knew what it was like to brake on snow!  Another time I was pulled up too far at a stop sign and my father told me to back up a bit.  I did so, but didn't look behind me so I bumped into the car waiting to go after me.  Again I was lucky that there wasn't any damage to either vehicle, and I very vividly remember that moment 30 years later.  If I tell my son to back up, I will absolutely make sure that he checks the rear-view mirror first!  One time while driving on the highway I had to switch lanes suddenly because I was coming up on a semi truck too fast.  I didn't check the lane and forced another car to have to go off the road, though (once again) nobody was hurt and no cars were damaged.  My mother was scared out of her mind and really laid into me!

All of these are lessons that I learned from my mistakes, and because I remember them well I can help keep my son from doing the same things.  Unfortunately I will probably forget other lessons or mistakes that I didn't actually make and he will end up making ones of his own.  Which he will then remember and keep his own children from doing. 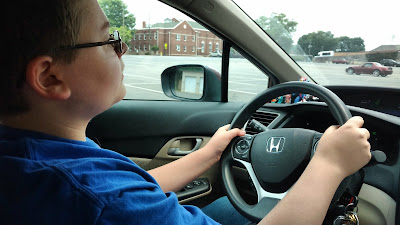 My daughter is 19 months younger, which means that in about a year and a half I'll be going through all of this with her.  Hopefully I will have learned some lessons about teaching driving by then!
Posted by Chris Bern, DVM at 5:52 PM