Connie asks this question:
How important is it for a small house to get a rabies vaccine. I know it's a law in Florida but since my dog is rarely outside alone except for walks, I feel it is not necessary.
In every US state rabies is required by law.  In every country I've ever had a client take their pet to, it is the one vaccine that must be given.  To enter some countries you have to be very specific in the timing of the rabies vaccine and even have titer levels run.  This is the one vaccine or preventative care that government officials don't joke about or give any leeway.
The reason for the strictness has to do with the very serious, incurable nature of the disease.  If a person is infected long enough and starts developing clinical symptoms, they will die.  It's that simple, as there is no treatment or cure.  Transmission requires direct contact, but the virus particles can go through the smallest opening.  For example, infected saliva contacting an abrasion or small cut is enough to transmit the disease.  It doesn't take a full bite wound.  People have been exposed by having a stray kitten lick them, or removing something from a horse's mouth.  Symptoms don't show up immediately, sometimes delayed by many months, so it may not be immediately obvious that an animal is rabid.
This is a deadly, incurable disease.  And humans can easily catch it if exposed.  We have significantly reduced the number of human cases through wide-spred vaccination of pets and livestock, as well as control of animals entering certain countries.  There are even programs to leave vaccine-infused bait in endemic areas to help prevent transmission in wild carnivores.  If people stopped vaccinating, this disease could easily become much more wide-spread.
Now you hopefully understand why the laws were established and why the governments are so strict.  But what is the real risk of exposure?
Certain parts of the country are definitely at higher risk than others.  There are also different wild animals that are typical carriers (reservoirs) of rabies in different areas, though any warm-blooded animal has the potential to carry it.  Here are some graphics from the Centers for Disease Control.
Most common reservoirs for rabies.

And since Connie lives in Florida, here is specific data for part of 2013. 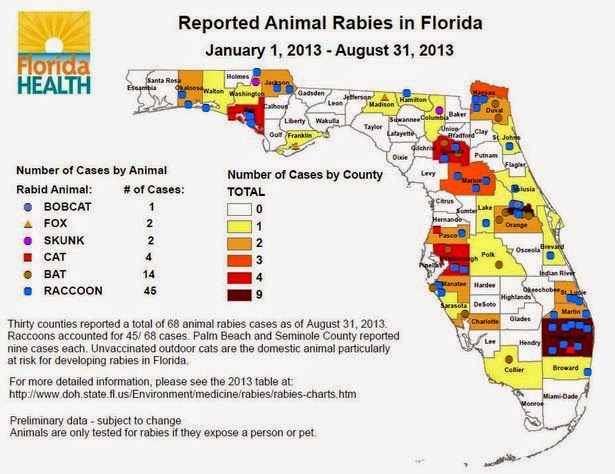 As you can see, this is a wide-spread problem.  And just because a certain area doesn't have any "dots" doesn't mean rabies isn't there.  It just mean that specific cases weren't diagnosed, but can still be in the wild population.
So what about the dog who pretty much lives indoors and goes out only a leash?  That's where the situation gets tricky.  That particular pet indeed has an extremely low risk of being exposed to the disease.  But it's not impossible for a dead or dying bat to be found by the dog, giving exposure.  Rabid animals don't behave normally, so an infected raccoon could possibly attack the dog.  What about a dog wandering the neighborhood that attacks?  Sure, I'll admit that these things are pretty rare, but they're by no means impossible. I've seen plenty of dogs attacked by wild animals, or even stray dogs, and in those situations you have no way of telling the rabies status of the attacker without killing it and having the brain examined.  Do you want to take that risk?
There's also the bigger issue of legality.  When a pet bites someone or punctures the skin with their teeth, it gets reported to local animal control.  They then look into the case, and if the pet isn't current on the rabies vaccine it will be quarantined at the owner's expense and a fine charged.  After 31 years in this profession I can assure you that even the best, nicest dog or cat has the potential to bite, especially if they are scared, sick, or injured.  If that happens and the dog isn't current on rabies vaccine, the owner is in for a world of trouble from law enforcement.
I know this has been a long answer for a simple question, but I wanted to take the time to go into the details and "whys" of the situation.  The short answer is yes, it's important even for mostly indoor pets to get rabies vaccines.
Posted by Chris Bern, DVM at 1:09 PM