For those of you who aren't fans of the TV show The Big Bang Theory, my title is derived from a famous, recurring song on the show.  Go to YouTube and type in "Soft Kitty" and you'll see what I'm talking about.

But the kitty I'm posting about today isn't exactly soft.  He was very sweet, but has a face that only a mother could love.  Years ago he had been in a bad fight with another cat and one side of his face was mauled.  There was permanent damage to his ear and eyelid and the scarring was extensive.  As you can see from the following photos he ended up with a rather startling appearance 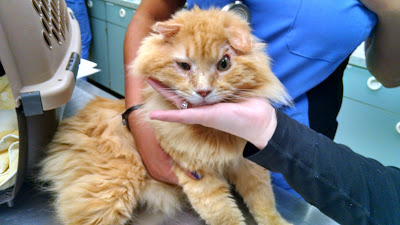 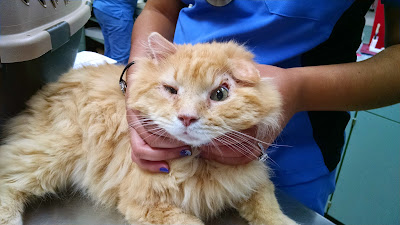 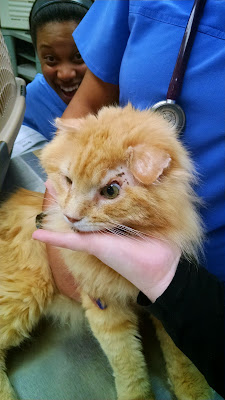 Yes, that's one of my veterinary assistants photobombing in the last picture.  Everyone say hi to Asia (her name)!

I've been trying to imagine how these injuries looked when he first received them.  He must have looked horrible!  And considering the damage to his left eyelid, he's lucky that he didn't lose the eye.  Thankfully he recovered, and though he has some extensive permanent scarring, he will go on to life a normal ife.
Posted by Chris Bern, DVM at 6:45 PM