Sometimes I think it's easy to forget that doctors are just people. We have interests and hobbies outside of medicine. Our lives aren't filled with diseases, injuries, diagnostics, and surgeries 24/7. We aren't constantly thinking about medicine. And sometimes our other interests are far removed from our jobs. In my case one of these departures is Renaissance Faires.

I have always had an interest in Medieval and Renaissance time periods. The ideas of knights, damsels, intrigue, and swashbuckling have always drawn me to them. When I was in college and was required to take Physical Education courses, I deliberately chose classes in this vein: archery, fencing, and canoeing. When I was in graduate school I attended my first Renaissance Festival and was hooked. That was back in the early '90s and I haven't given up since then. I took my wife to one when we were dating, and she began to embrace them as well. Over the years we have collected clothing and equipment for several outfits and have gotten our kids interested in the hobby.

For those of you who have never been to a Ren Faire, let me describe them a bit. They usually begin in the Spring and the "season" lasts into the Fall. Depending on the size of the Faire, some will last anywhere from a week or two to several months. They are held on the weekends in parks and other natural areas where permanent buildings are often erected. Once inside the Faire you can visit artisans and vendors for clothing, weapons, tapestries, candles, jewlery, and many other crafts. Official workers at the Faires walk around dressed in period clothes, and will enact various scenes to tell a larger story that goes on throughout the day. There will be a king and queen presiding over the affairs. And there is usually an arena where live jousts and swordfighting happen. The larger Faires will have stages where other performers will give shows ranging from music to comedy, daring acts of tightrope walking or juggling, and singing to belly dancing. Many attendees (such as my family) also dress in costume to the point where it can be difficult to tell who works there and who simply showed up.

The Faires are not always interested in complete historical accuracy, and are more about the idealized versions. They exist more for fun and escapism than anything. But it's so nice to be able to spend a sunny day wandering for miles in a world pulled from the 15th, 16th, or 17th century. For a day you can imagine yourself a stalwart night, a dashing musketeer, a rougish pirate, or a delicate princess. You can address people as "my lord" and not feel silly. You can say "huzzah" when you cheer and feel completely at ease. And above all you can pretend that the worries of the 21st cenury don't exist for a few hours.

For those of you who have never been, I would highly recommend it as a fun family outing. Who knows, you might actually run into me and my family one day. 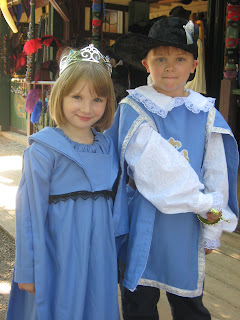 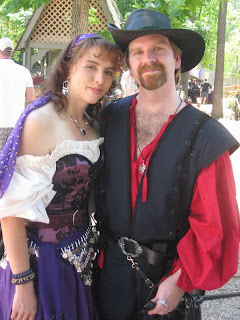