Here's a bit of a strange case for those vets reading this blog. And some cool images for everyone else.

This dog came to us about 3 weeks ago for vomiting. Blood tests showed nothing abnormal, so my associate started her on anti-nausea medication and some easily digestible food. The dog was acting good overall, and is a 2 year-old spayed female terrier mix. The problem didn't seem to get any better, so the client brought her back. This time we did x-rays. When we start this kind of diagnostic we do what we call a "plain film", which is a basic x-ray. This is what we found. 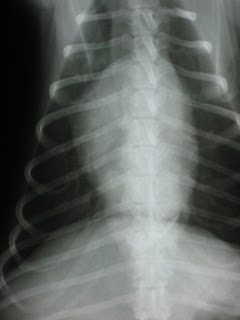 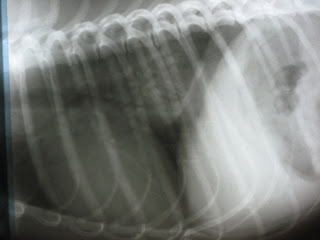 See the problem? Yeah, neither did I. So I made the dog swallow barium liquid and took another set of radiographs immediately afterwards. Since barium is a metal, it shows up bright white on an x-ray film and will often highlight things that aren't obvious in any other way. Here's what we saw. 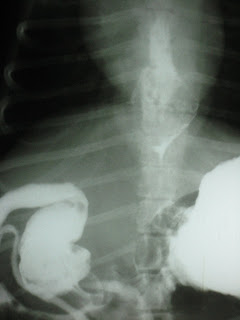 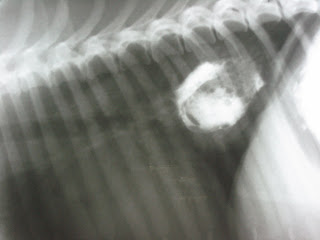 See the problem now? The first image is less obvious, but there is a bulge in the esophagus just before it passes through the diaphragm and into the stomach. This is due to one of several things. There could be a hiatal hernia, where part of the stomach bulges back through the diaphragm and into the chest. But a more likely possibility is that there is a narrowing of the esophagus just before the stomach. So the dog wasn't actually vomiting, it was regurgitating the food. She would swallow too much too fast, and since it couldn't pass into the stomach most of it would come right back up. She is doing well being fed small, frequent meals of soft foods. But she is also being referred to a specialist for upper GI endoscopy to visualize what the problem is and how we can fix it.

This is also a case that illustrates the importance of continued diagnostics. I had to convince the owner to do the barium views, but that's what it took for us to make the diagnosis. I had suspected a problem like this, but we needed to be able to actually see it. So when your vet recommends doing further testing, please listen to him or her!