Here's an interesting set of images that I thought many of you would find interesting. This dog is a boxer puppy, about 5 months old. He was playing with a neighbor's dogs when one of those dogs bit him hard on the foot. Normally this would cause some wounds, but not necessarily anything serious. Not so in this case. There really weren't any deep wounds, but there was some obvious damage to the foot. When he came in I could tell that the paw was at a slightly odd angle, and the x-rays confirmed it. 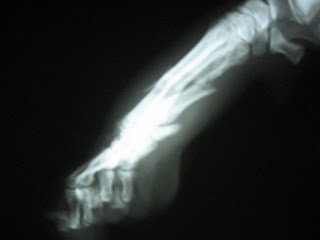 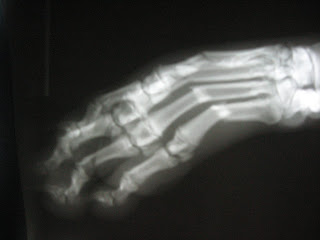 All four metacarpal bones are broken, and a couple of them are pretty displaced. In a human these are the bones in the hand between the wrist and fingers. Being a young puppy he has a great chance of this healing. However, the misalignment of the bones is significant enough that he probably needs surgery. Splinting this has a relatively high likelihood of improper healing, though we placed a temporary splint to stabilize it. I saw him for a recheck today and he's bouncing along on his splint like it doesn't bother him, which isn't good as he really needs to have more restricted activity.

I'll be posting some other interesting images as the week goes on.
Posted by Chris Bern, DVM at 8:37 PM