A Tale Of Three Uteruses....Why You Should Spay

**CAUTION--Graphic images from surgery.  Proceed at your own risk.**

Recently I had a rather interesting day.  I had three dogs in to be spayed, but each one was a completely different situation.  And I realized that the comparison between these dogs was a good discussion on why you should have your own pets spayed.

Let's start with the first one who was a six month old healthy German Shepherd mix.  She weighed around 58 pounds (26 kg) and had not gone through her first heat cycle.  The surgery went smoothly and there were no problems.  Here is what her uterus looked like once it was removed. 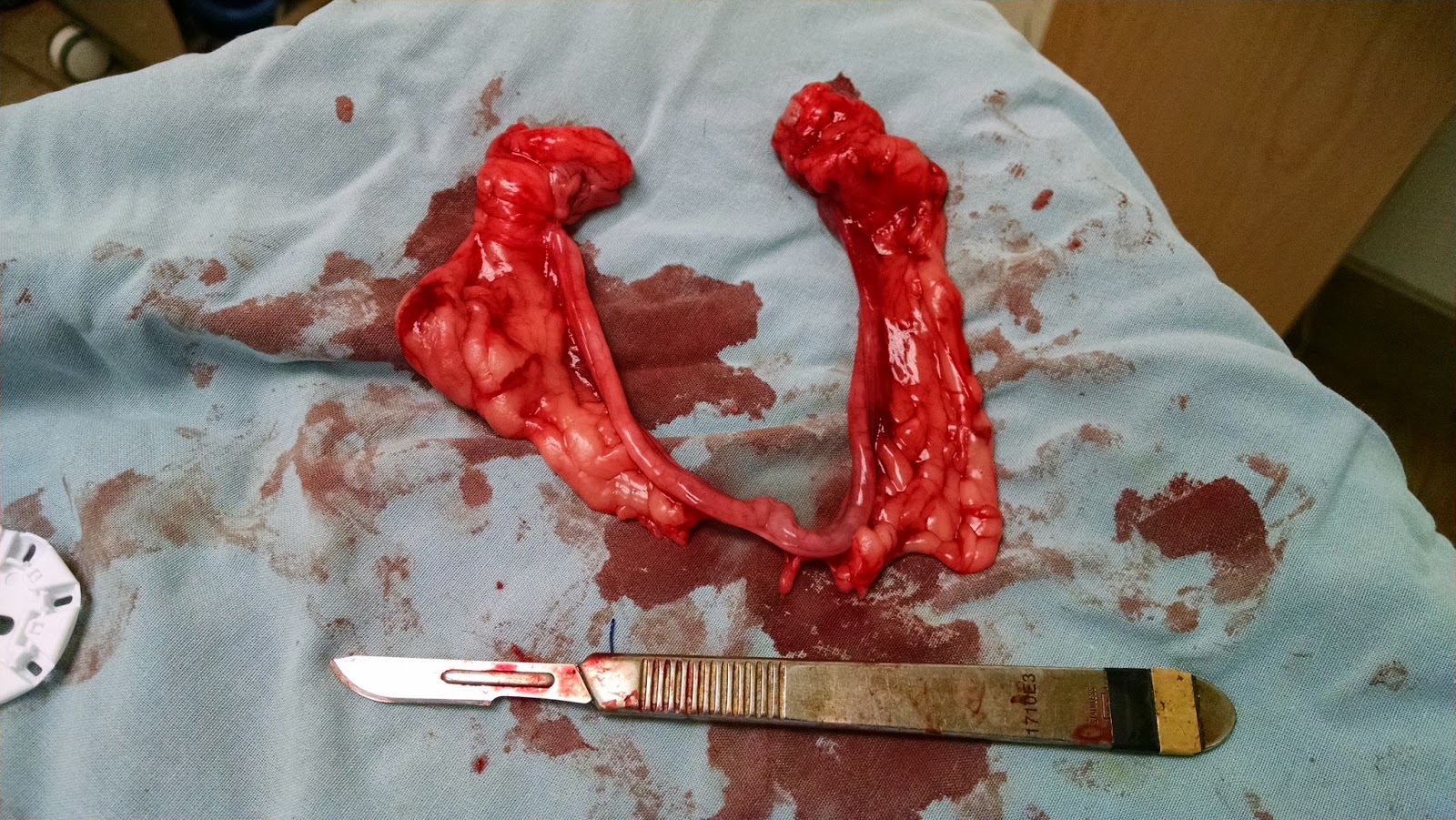 For those who aren't used to seeing these things, the tubular structures in the center of the "V" are the horns of the uterus, with the ovaries at the top of the photo.  The fatty material extending past the tubes and towards the sides is the connective tissue surrounding the uterus.  Pay attention to the scalpel, which is provided for scale.  That becomes very important in a minute.

The next patient was a pure-bred German Shepherd, also at six months old.  This patient was in the middle of her first heat cycle, but the owner didn't want to reschedule so we went ahead and did the surgery.  This dog was 46 pounds (around 21 kg) and her uterus was about three times the size of the first one.  Here's what it looked like post-operatively. 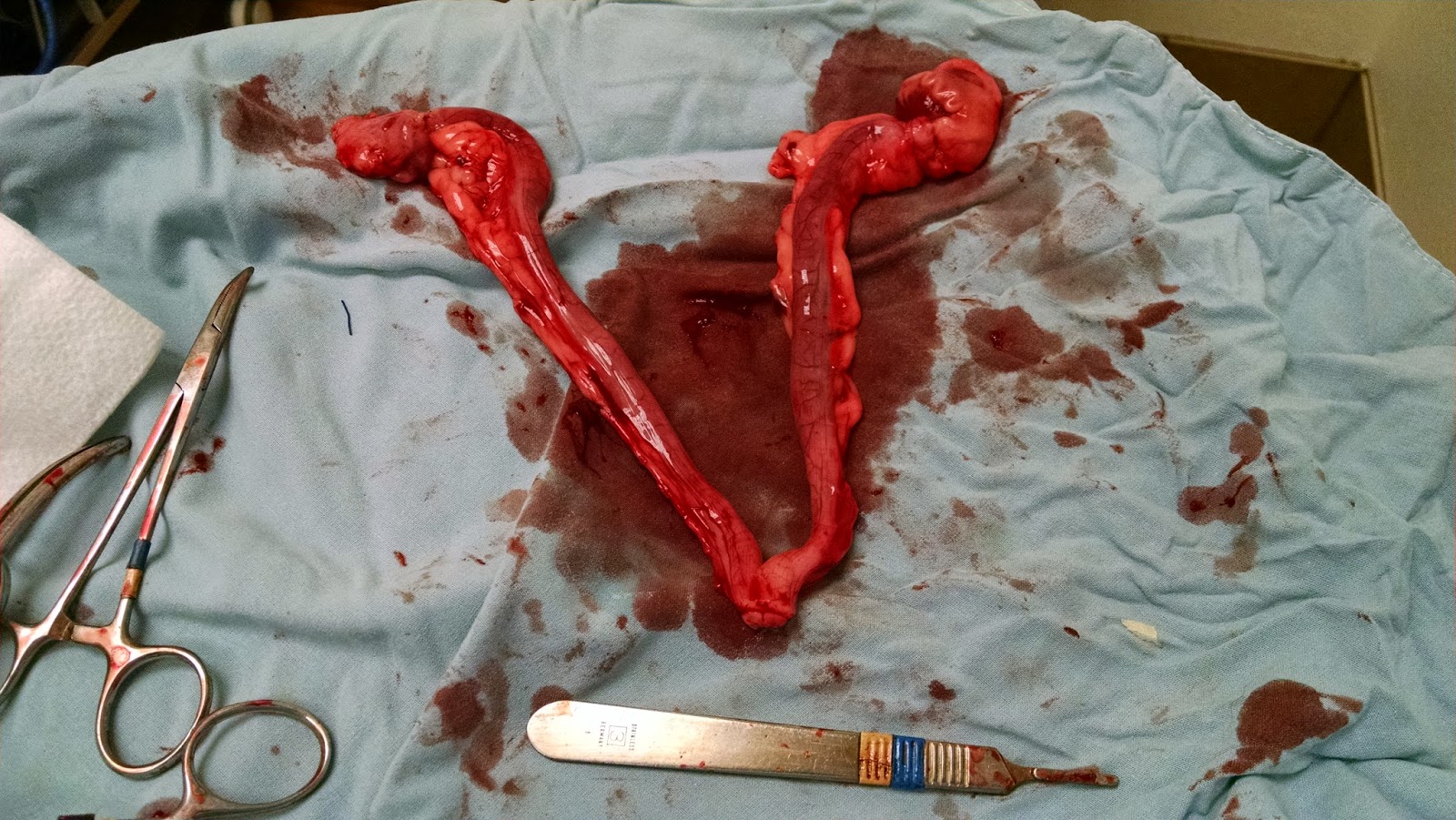 It may not be obvious when you first look at the photo, but look at the scalpel handle for scale.  This uterus is several times thicker than the other one and though you can't see them there are much larger surrounding blood vessels.  Doing a spay on a dog in heat takes longer, uses more suture material, and carries a slightly higher risk of bleeding.  Even so, it can be done safely and this dog also recovered without problems, though the surgery took me over 30 minutes rather than my typical 20 minutes.

The last dog was an 11 year old shih tzu who weighed just under 14 pounds (about 6 kg).  She had developed a life-threatening uterine infection that required immediate surgery.  This is called pyometra, and involves an infection of the uterus so severe that the organ fills with pus and can kill the dog if it ruptures.  The only treatment is usually to do rapid surgery and remove the offending organ, though this is a high risk procedure since even handling it can result in a rupture, spilling pus into the abdomen.  Thankfully this surgery went smoothly, but the uterus was obviously abnormal.  Compare this one to the other two. 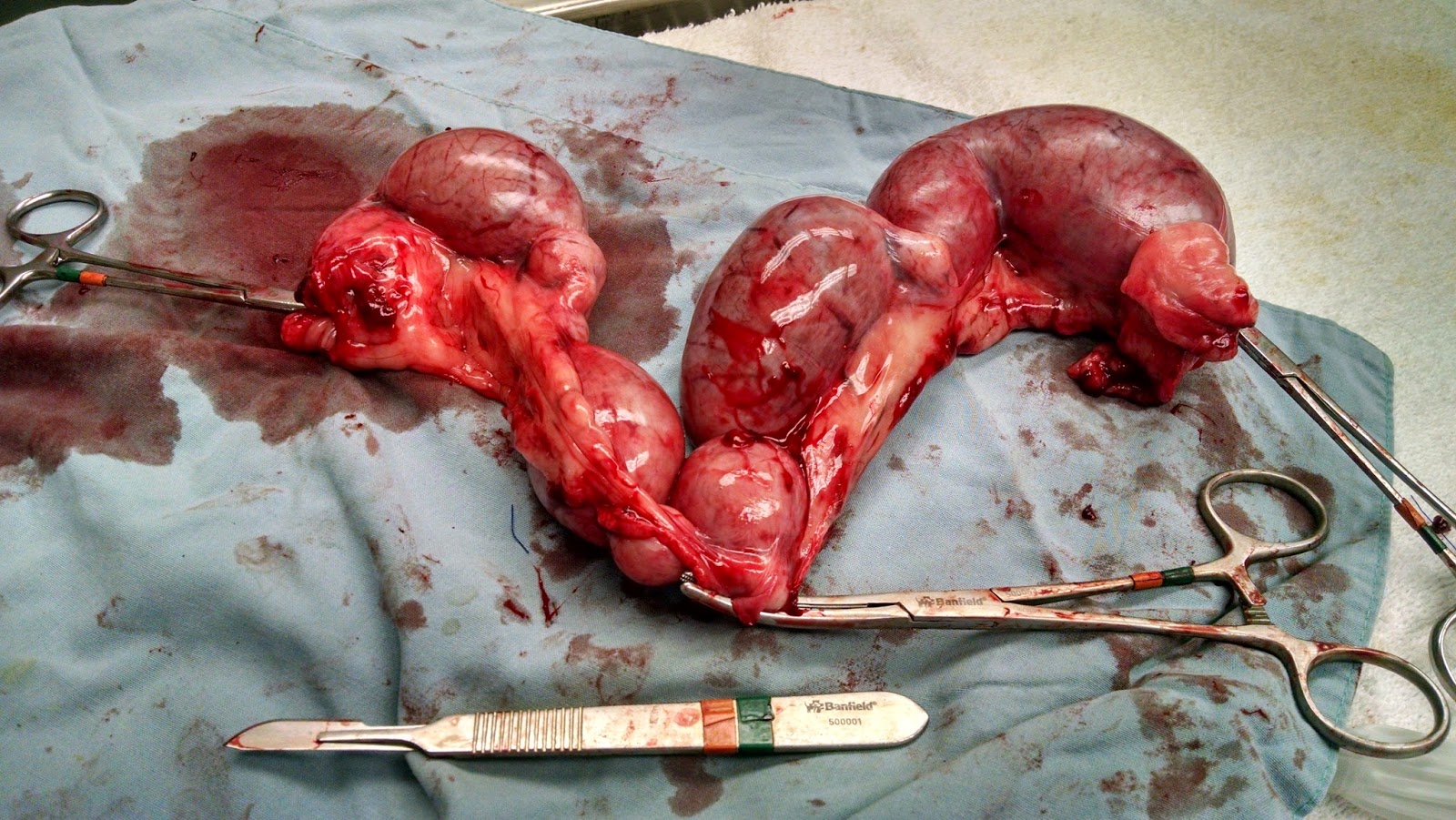 Again, go back and look at the other photos using the scalpel for scale.  This uterus is very obviously swollen and discolored.  And if that's not gross enough, here is what it looked like when I opened one section. 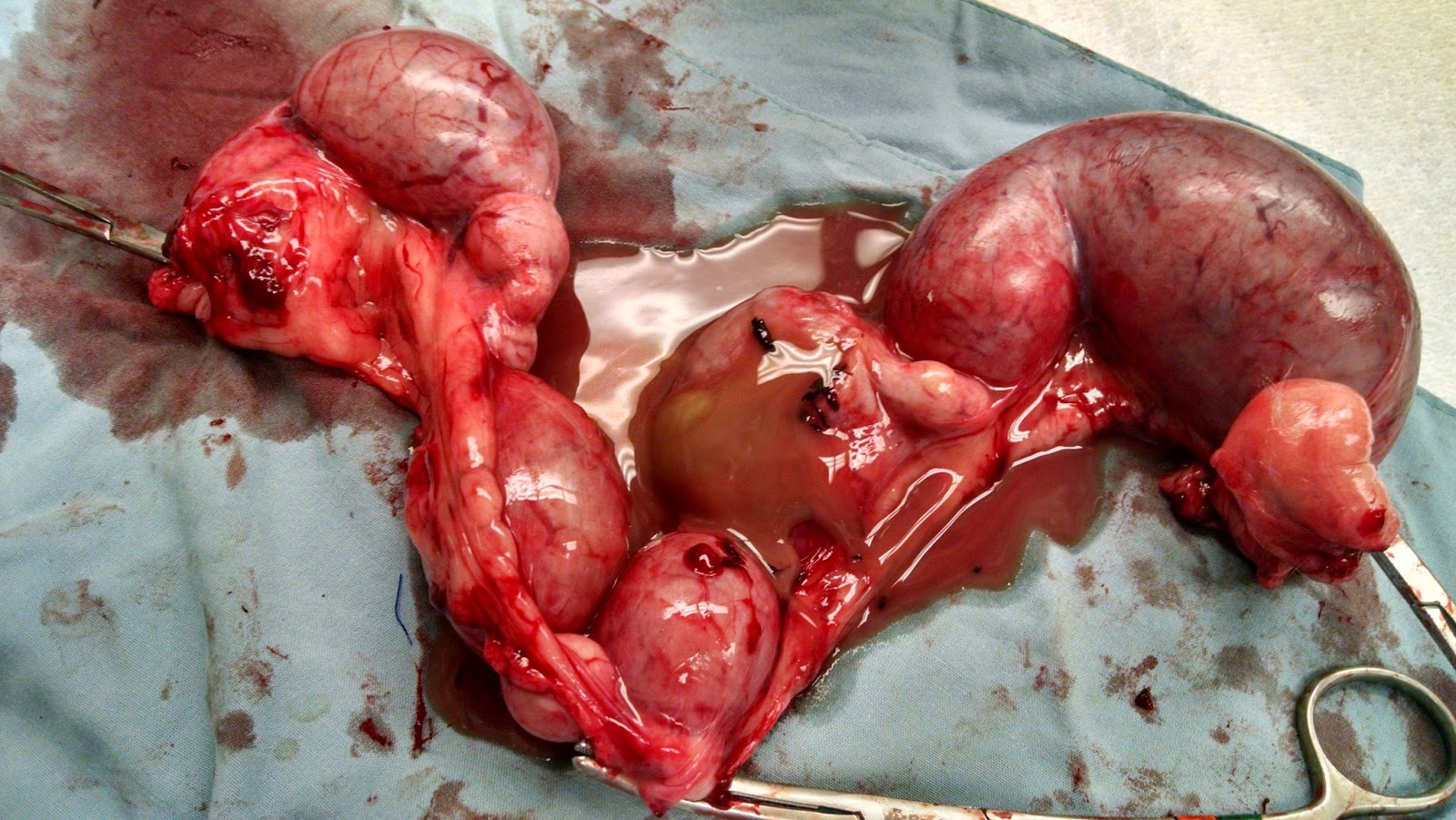 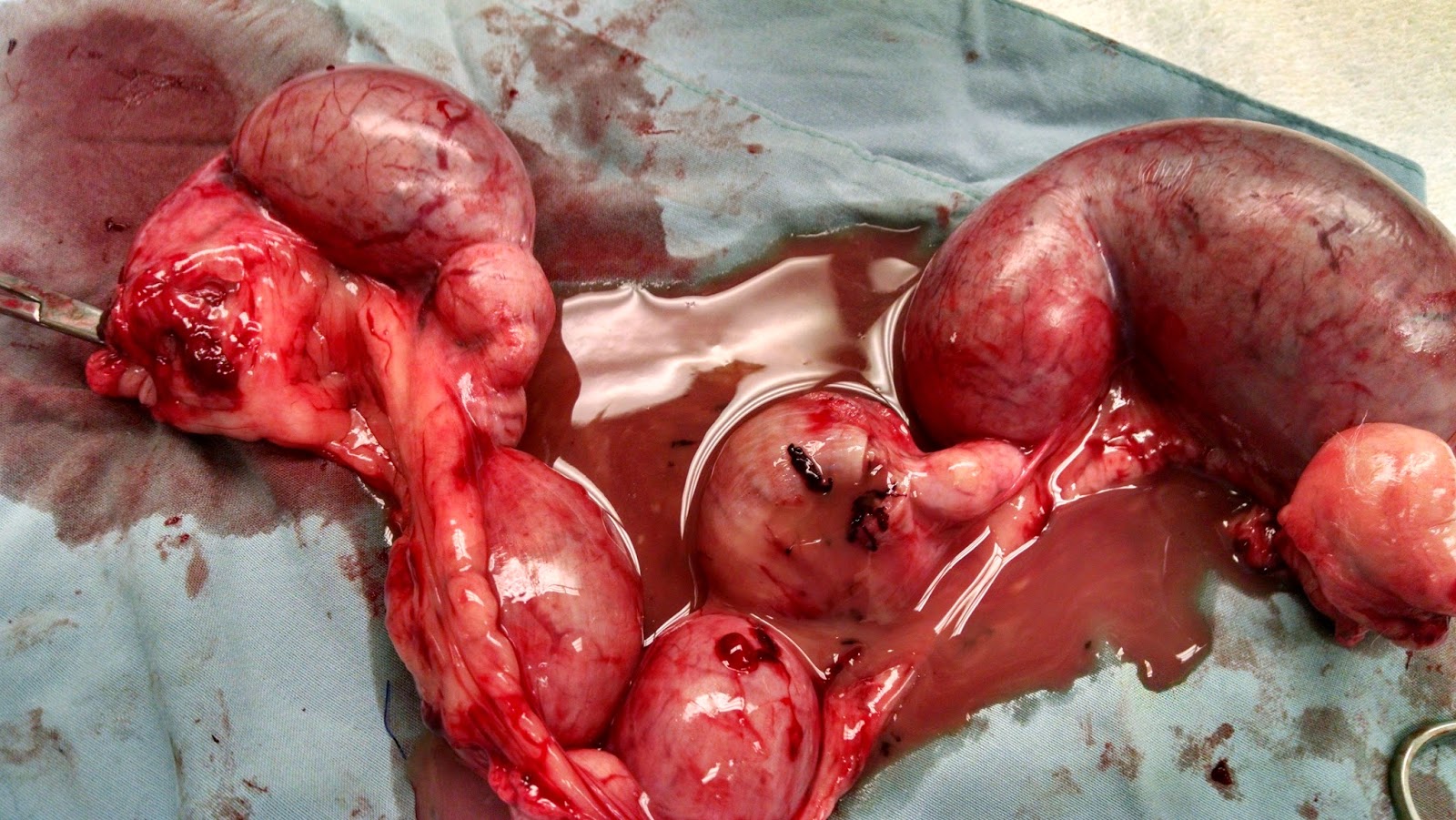 All of that nasty fluid was inside the uterus!  And it could have been prevented by spaying her at a young age.

So let's recap the situation.  The largest dog had the smallest uterus and the smallest dog had the largest uterus.  All three came through their surgeries with flying colors and all three were doing great on their post-op recheck 10 days later.  But the dog who had not gone into heat yet had the lowest risk of all of them, so the other situations, especially the last one, could have turned out much worse.

Let's also look at the cost differences.  The first surgery was routine and ran around $350.  Since the second one was in heat and that takes longer, it ended up being around $430.  The pyometra case was over $800.

Do you see the lesson here?  It's better for your dog and for your wallet to have the spay done before their first heat cycle.  Do yourself and your pets a favor and have them spayed by six months old.
Posted by Chris Bern, DVM at 10:36 PM