A Start To Fixing Our Country

I disagree with both.  The problem is people's hearts.  Guns and racism are simply methods of showing what is in their heart.  If people were all the same color or guns were outlawed those with hate inside them would find another way to express it.  We need to combat these issues in some very different ways.

Even as a white man who is far removed from the civil rights movement I have always found Martin Luther King, Jr. inspiring.  I do believe that he was an extremely wise man and one who understood how to bring about change in the right way.  Let's start by remembering some great quotes from him. 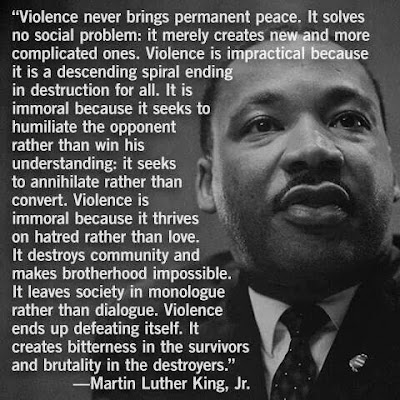 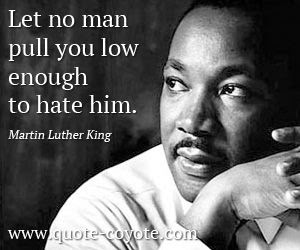 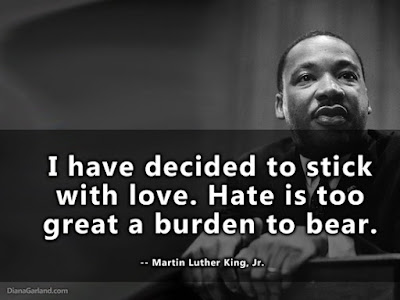 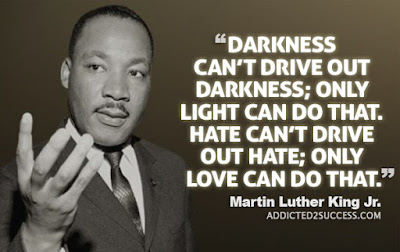 I know that I might be accused of so-called "white privilege" or "microaggression", but I think that many of the modern-day protesters need to go back and really read and listen to King's words.  We need to stop the divisions in this country between races and viewpoints.  Our country seems more divided and polarized than at any time I can remember in my 46 years.  It seems that people thrive on opposing others, and become heated to the point of violence.  What does that solve?  Really, nothing.  Just go back and re-read the quotes above.

So what can we do?  First, let's start with King's ideals, quotes, and example.  Many of the modern protesters and activists certainly aren't doing that.  Here is a great segment from an interview with Morgan Freeman on 60 Minutes ten years ago.

Let's stop talking about what divides us.  Let's truly ignore what race someone is and concentrate on their heart and actions.

Yes, this is very possible.  Here is a recent CNN video showing exactly what can happen when people try to peacefully bridge a divide without making accusations and without yelling.

I've come across a new movement called the Free Hugs Project (www.freehugsproject.com) that is truly inspiring.  The founder, Ken Nwadike, Jr., started the organization based on truth and love.  To him it's about reaching out in peace to bring people together.  Even when he's speaking on the idea of "black lives matter", he's rational with passion and pretty inspiring.  I want to share a few of his videos as examples of how we can come together and understand each other better.

If more people acted in a like manner to the above videos, we'd be in a far different situation.  If everyone stopped accusing and hating we'd be a step closer to really coming together to better our communities and our country.  We need to be coming together, not moving further apart. 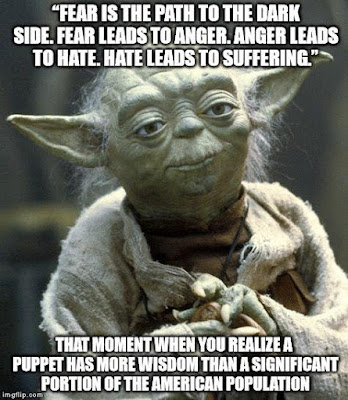 I normally don't get into political or social rants on this blog, but since this is as much about the life of a veterinarian as it is about the profession itself, I feel that it's important to deviate into this area from time to time.  But I was really inspired by the sermon my pastor gave this past weekend.  He hit this topic hard and it really made me start thinking about things a bit differently.  Even if you're not typically the religious type, I think it's well worth watching and would encourage you to do so.

As a doctor I have been trained to know the difference between symptoms and disease.  Fever, pus, lethargy, anemia....these are all symptoms.  They are what happen as a result of a disease.  Sure we can treat the symptoms and make the patient feel better.  But if the disease isn't eliminated those symptoms will keep coming back again and again.  The only way to resolve the symptoms completely is to treat the underlying disease.

We need to address our social problems in a similar way.  We need to look past gun violence, racism, political opposition, and all of the other things that cause division between us.  Those are just symptoms, and if all we do is treat the symptoms we will never solve the problem.  We need to focus on the true disease itself, which is dark hearts and hatred.

I pray that we can do so before our society fractures further.
Posted by Chris Bern, DVM at 12:04 AM